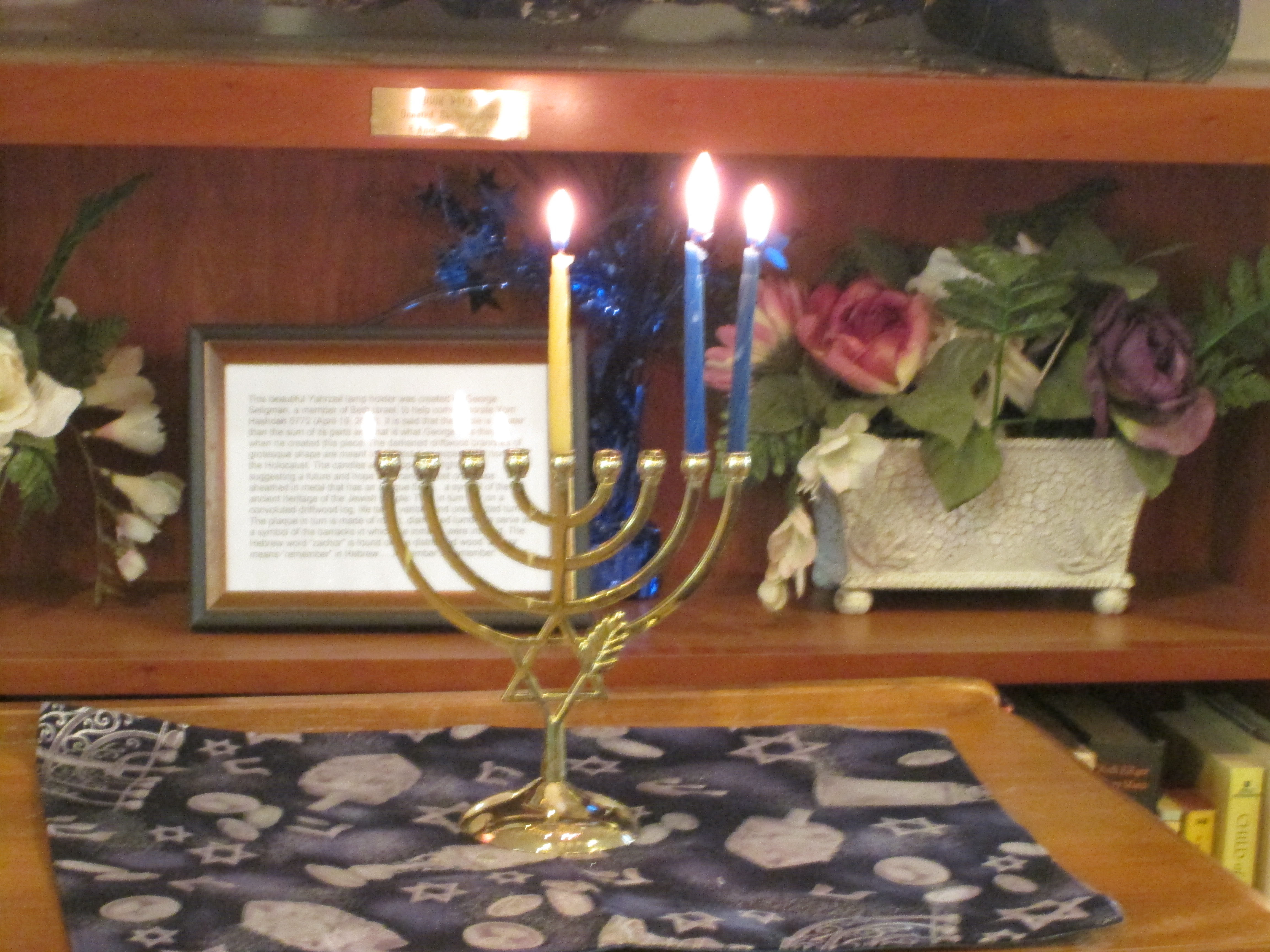 Hanukkah meaning “dedication” in Hebrew, refers to the joyous eight-day celebration during which Jews commemorate the victory of the Maccabees over the armies of Syria in 165 B.C.E. and the subsequent liberation and “rededication” of the Temple in Jerusalem. The modern home celebration of Hanukkah centers around the lighting of the chanukiyah, a special menorah for Hanukkah; foods prepared in oil including latkes (potato pancakes) and sufganiyot (jelly donuts); and special songs and games.

The modern home celebration of Chanukah centers around the lighting of the Chanukiah, a special menorah for Hanukkah; unique foods are eaten like latkes and jelly doughnuts called Sufganiot; and special songs and games are played.

In less than two weeks, Sunday night, December 22, Jews all over the world will light the first Chanukah candle, thus, beginning the eight day holiday of Chanukah – The Holiday of Lights.
Many times I have heard the following question: “Why do the Jewish holidays vary from year to year? Why do the dates for Passover, Rosh Hashana, Chanukah etc. change from year to year?”
The truth is that on the Hebrew calendar, the holidays are on the exact same day every year.
For example, Chanukah always begins on the twenty fifth day in the month of Kislev. On the Hebrew calendar the day begins not from midnight, as in the civil calendar, but from nightfall. Thus, on Sunday evening, which is the twenth fourth of Kislev, we will light the first Chanukah candle. The dates change only on the civil calendar!
One of the reasons for the name Chanukah is that it combines two words, Chanu (they rested) – Kah (has a numerical value of 25). Chanukah is always on the 25th day of Kislev.
Q.   Why can’t the Hebrew and civil calendar be synchronized?
A.  The Hebrew calendar year has 354 days, while the civil calendar has 365 days. This is the reason why the Jewish holidays will differ from year to year on the secular calendar.
Q.  Why do we light the Chanukah candles near a window, door or in public places?
A.   The reason is to publicize the miracle of Chanukah for everyone to see.
Q. We don’t publicize the miracles of the Exodus or Purim by performing the Seder, or reading the megillah near a window. Why do we have to publicize the miracle of the Chanukah lights?
A.   The miracles of the Exodus and Purim were witnessed by all Jews; it affected everyone and was celebrated by everyone as their personal miracle. But, the miracle of the oil, took place inside the Holy Temple.
Only the Kohanim (priests) were allowed to enter the Temple and as a result the miracle of the oil was not visible to the public. For this reason, the rabbis decreed that we should perform the lighting of the menorah in a way that the miracle will be publicized to everyone.

The reason for celebrating the holiday through the lighting of the candles is to commemorate the miracle of the lights in the Holy Temple, when a small amount of oil, barely enough for one day miraculously lasted eight days.

Q. Why do many people use olive oil, instead of candles, to light the Chanukah Menorah?

A. In the Beth Hamikdash (Holy Temple) only pure olive oil was used for the Menorah. Because the Chanukah lights commemorate the miracle of the menorah in the Holy Temple, it is preferable to use olive oil to perform this mitzvah.

A. There are a few reasons: 1) It was instituted for the sake of travelers that are away from home and come to synagogue to pray, but don’t have where to light Chanukah candles.

2) The Chanukah candles commemorate the miracle of the lights which took place in the Holy Temple. In commemoration, we light the candles each day in the synagogue, which represents the Temple. In fact, a synagogue is called, “a miniature Temple.”

3) Not everyone lives in a place where they have the ability to light the candles, especially, during the time when Jews were persecuted and were afraid to light at home because of their gentile neighbors. Thus, the rabbis instituted the custom to light the Chanukah menorah in the synagogue.

Q. Why was only pure olive oil used for the lighting of the menorah in the Holy Temple?

A. Our sages explain that there is a very important lesson in this. The Jewish people are compared to the olive. Just like the olive produces its fine oil when squeezed, so too, the people of Israel have produced their greatest scholars and performed their greatest accomplishments under the pressures of exile.

The Chanukah candles remind us that just like the oil of the olive is produced through squeezing and pressing of the olives, so it is also with the Jewish people. It is the challenging situations which so often brought out the best in us and revealed capabilities we never knew we possessed!

Chanukah being an eight-day holiday, there is always at least one Shabbat during Chanukah and sometimes even two, when the first day is Shabbat.

Q. What is the meaning of the name Chanukah?

A. Chanukah means dedication. On Chanukah, the 25th day in the month of Kislev, the Holy Temple, which was in a state of defilement, was re-dedicated and restored.

Q. Why is Chanukah celebrated for eight days?

A. When the Jews re-dedicated the Temple and wanted to light the Menorah, they realized that all the jars of oil were defiled by the Greeks and were not fit for lighting the Holy Menorah in the Temple. They finally found one cruise of undefiled pure olive oil, bearing the seal of the High Priest. However, it contained no more than one days supply. But when they lit the menorah a miracle occurred and the oil lasted for eight days. By then they were able to produce new oil.

Q. Why, in contrast to the Shabbat candles which are lit on the table where we eat the Shabbat meal, the Chanukah candles are kindled near a window or door?

Q. Why is it important to publicize the miracle of Chanukah more than other miracles?

A. The miracle of Chanukah, when a small cruise of oil, enough to barely last one day, lasted eight days, took place inside the Holy Temple. This miracle was not visible to everyone, as only the Kohanim (priestly family) were allowed to enter the Holy Temple. Thus, the rabbis established that this miracle should be publicized, so that everyone will know about it.

Q. One is not permitted to have any personal use from the Chanukah lights. Why?


Chanuka, celebrates two miracles. 1) The miracle of the oil in the Holy Temple, when a small amount of oil barely enough to last one night, lasted for eight nights. 2) The miracle in which the small army of the Macabees were victorious over the great armies of their Syrian-Greek-Hellenistic enemies. As we recite in the Al Hanisim prayer of Chanukah, “Strong fell in the hands of the weak; many into the hands of the few.”

These two miracles are celebrated by lighting the Chanukah lights for eight days.

A. The decrees against the Jewish people at the time of Chanukah were of spiritual nature. Jews were prohibited to study Torah and observe the mitzvot which connect us to G-d. Thus, the war which the Macabees fought against their enemies was to protect and save the Jewish soul.

Thus, the sages established to celebrate both miracles of Chanukah with the lighting of candles. It not only celebrates the miracle of the oil in the Temple, it also commemorates the victory of the war against the Jewish soul (candle) and the victory of Torah and mitzvot.

The Chanukah candles remind us to believe in the power of miracles. Miracles happen all the time, it is only a matter of recognizing them. Some miracles are obvious, while most are hidden, as they are concealed in what we call “nature.”

The spiritual illumination of the Chanukah candles should enlighten us to see, to recognize and be thankful for G-d’s constant miracles which accompany us with every breath, every minute of the day.