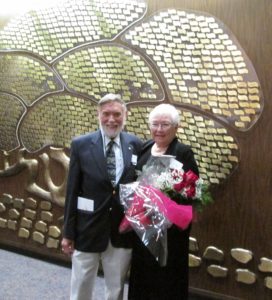 Idalea has been involved with Beth Israel Congregation of Sun City Center for eleven years. She served as Program Chair from 2003-2009, and Board Member-at-Large in 2010. Idalea has initiated and chaired various programs for the congregation, including the annual Scholar in Residence program, Jewish Book Club, and “Movies and a Bissle Nosh” featuring Jewish-themed movies. She has been the song leader for the Women’s Seder since 2007. As Social Action Chair, Idalea has invigorated the congregation’s involvement in social action issues, such as human rights for tomato pickers, coupons for overseas military families, human trafficking, and feeding the hungry. Through her efforts, Beth Israel participated in and became one of the venues of the Tampa Bay Jewish Film Festival and Tampa Jewish Book Festival. She enlisted the cooperation of the Tampa Jewish Federation to provide transportation for Sun City Center residents to programs such as the 92nd Street Y series.

At Temple Emmanuel Baltimore, Idalea taught Sunday School and was the youth group founder and advisor from 1970-1982. She was President of Maryland Music Education for Kodaly. Idalea was Co-Founder and Director of the Children’s Chorus of Carroll County from 1984-2001, and performed at the White House Holiday Celebration in 1997. She also performed at Music Educators National Conference in 1998 and Carnegie Hall in 2001. Idalea was the music educator of vocal music for Carroll County Schools from 19783-1998. She was Homecoming Chair of the Peabody Conservatory of Music in 1990 and 1992 and served as President of the Peabody Conservatory of Music Alumni from 1993-1995. She was honored as Teacher of the Year by the Chamber of Commerce for Carrol County in 1997, and 125 of her fifth-grade students performed the National Anthem at Camden Yards in 1997.

Idalea was also the Corresponding Secretary of the South Shore Democratic club from 2006-2008. In addition to being a member of Beth Israel since 2001, Idalea was a member of Temple Emanuel in Baltimore from 1968-2003. Idalea and her husband, Robert have six children and eleven grandchildren.