August 24, 2018 By Nina Malinak in Uncategorized 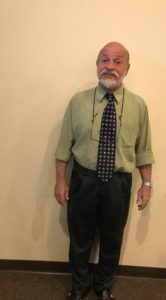 Paul Spiegal, our Beth Israel’s special volunteer, has given so much to our congregation. Not only does Paul join the rummage sale crew in making things happen, but he shleps in his jewelry and sets up tables outside or inside and sells his jewelry giving Beth Israel most of the proceeds. Not only did he chair the fund-raising committee for many years shortly after he and Marlene arrived here, but he still continues to help with that committee when he is in town. Not only does he attend services on a regular basis, but you can usually find him schlepping the garbage out to the curb. You might call Paul a consummate shlepper!

Paul and Marlene moved to the SCC area in 2006. He was raised in the Boston area (check out the accent) and began his career there. Paul has been involved in Jewish community nonprofit work his entire life. He doesn’t know what it means not to volunteer. He has been the CEO of Federations and JCCs in Lawrence, Massachusetts, Lancaster, PA, Binghamton, NY, and Canton, OH. His heroes are the volunteers of each of the organizations he has been involved in; he knows and appreciates the work each volunteer gives to the organization.

Paul firmly believes that being a volunteer for Beth Israel is more crucial than most organizations because many of our congregants are physically unable to help out. He encourages everyone who can, to “step up to the plate and help out.”